This is one of our sweet little chickens, happy that spring is springing. We still aren’t in the clear though…it seems like someone in our family tends to end up with a nasty spring cold. This year I think the person that got the short end of the stick is Shane. He wound up with some sort of a wicked chest cold.

The oil that he claims was the best relief though is Raven. I wanted to briefly discuss the difference between Raven and R.C. mostly because I forget which one is for which thing on a very regular basis. I know they are both great for chest colds/coughs but  I can’t ever remember which is good for virus and which is good for infection. I generally just use both (alternating) to cover my bases and they both bring immediate chest relief and cough relief so why not just use them both right?

R.C. has been discussed A LOT on this Mama’s blog. It is a blend of 3 types of Eucalyptus, Myrtle, Pine, Marjoram, Lavender, Cypress, Tsuga, and Peppermint. Apparently RC isn’t quite as powerful against viral infections as Raven.

Raven I haven’t talked about much at all, just maybe an occasional mention here and there. It too is a blend containing Ravensara, Lemon, Wintergreen, Peppermint and Eucalyptus Radiata. I have a tendency to believe that the magic actually stems from the Ravensara within this Raven Oil. So why not just get Ravensara and call it good? It too is a powerful single oil, but with Raven you get the blend of goodness. Shane told me that his chest felt tingly. Since the bulk of his sick was collecting in his lungs we just put it all over his chest and ahhh….relief!

So Raven goes beyond RC for upper respiratory problems and is especially useful for combating viruses. It is an awesome oil for asthma.

And I’ll sign off with a photo of my super cute husband or a few. Some are even of his backside. heh. 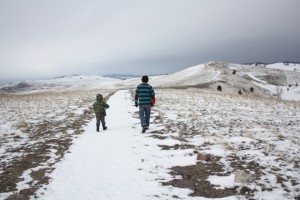 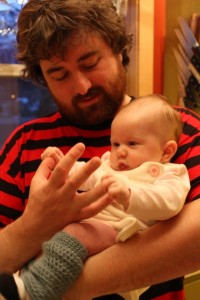