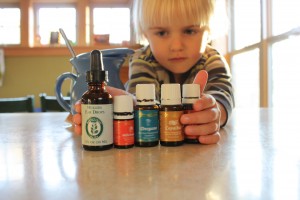 These were the precious rescue remedies for the most recent ear infection that Simon endured. Poor guy has gotten occasional ear infections since he was a bitty guy. We had antibiotics for the very first one, he was probably only about 6 months old and he had a horrible allergic reaction – that was 6 years ago. My kids haven’t had antibiotics since then. We use homeopathy, tinctures, chiropractic, and essential oils! 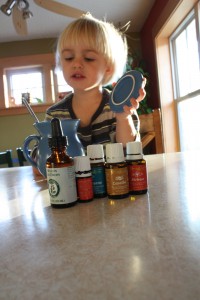 Of course a cup of tea will help with a cold. So don’t miss that cup of tea in the photos. 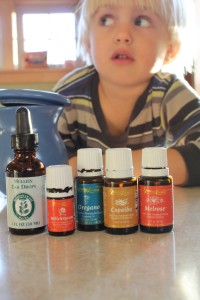 Here we have it, Mullen Garlic Ear Drops alternating with hydrogen peroxide (every other time), Helichrysum, Oregano, Copaiba, and Melrose. This is what worked for us, in a day 1/2. I did give Simon some Motrin for the pain the first day because it all began at school and it was in full force by the time he got home.

A heating pad is pretty key also. Simon laid on the couch a lot with a heating pad on his ear. I put the Oregano on the bottom of his feet to fight the infection. The Helichrysum was for pain, I rubbed it right on his neck where the eustachian tube is and around the rim of his ear. I used the Copaiba in addition to the Helichrysum to make it a bit stronger. Copaiba is an oil that increases the potency of the other oils that you use with it. And finally Melrose – also on the eustacian tube several times throughout the day to get rid of the infection.

One Response to "Ear Infection"