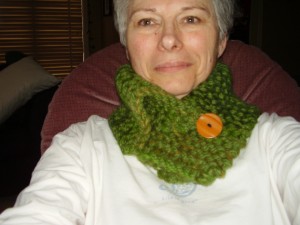 So just to show what a rookie I am – yesterday’s post mentioned that the scarf pictured was garter stitch (but it wasn’t) this neck warmer actually is! So yesterday was a stockinette stitch. I’m learning I’m learning. So I decided the first project should probably warm Grandma’s (Mom’s) Wisconsin Winter Chilled Neck. The only kicker was that she had to sew on her own button. Not that I can’t sew on a button – she just has a much better button selection than I do. So she did actually put the very finishing touch on right before she snapped this pretty photo of herself.

I didn’t have patterns for either of these projects I just kind of held them up as I went along and when I was satisfied with the length/width I called it good. They both came out pretty well (small pat on my own back) for a first timer! So onto more experimenting! This was similar to the scarf – I used a chunky wool blend and knitted it together with a variegated yarn to just add a little spunk. I used big needles again – just because it really speeds the project along and I like the look of it. I actually was in the middle of the yarn shop seeking out yarn when a sweet older woman approached me. She approached me because I was wearing my very colorful scarf that was actually knit by Jan (who is modeling this neck warmer). 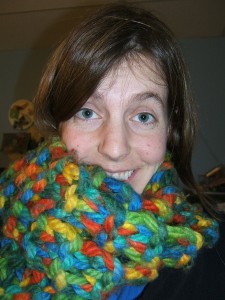 She told me she felt very comfortable talking to me because I was wearing something so colorful (warm fuzzies). Her advice was to get this inexpensive gigantic ball of yarn to mix with the solid colored yarns I selected – so I followed her advice and one of the skeins was the variegated I used in the blue scarf and the other was the variegated I used in the green neck warmer and there is still another color scheme you’ll see in some of my projects. They are the balls of yarn that will last a lifetime – well not really – at the rate I’m going- but they will last quite a spell. Okay so that’s all for today. I’m not sure on the size needles I used for the neck warmer – maybe 11? Something big! Happy Knitting!

One Response to "Grandma’s Neck Warmer"